Past Weather Experience Is Important For Forecasting

In meteorology, past weather events can be a great forecasting tool if a weather set-up looks similar to an event that has occurred in the past. The experience allows a meteorologist to determine whether computer forecast modeling has a chance to verify or not and in some cases it becomes obvious that the models have it all wrong. This is useful information that can be used to make better predictions and in some cases it enables the forecaster a chance to predict an exceptional event that is missed by some of the most seasoned forecasters.
Read More Download Full PDF 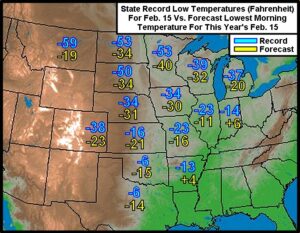 Kansas City, February 12 (World Weather Inc.) – Record setting cold temperatures may impact many areas across the Plains and western Midwest early next week as the massive arctic airmass creeps into the region. Interestingly, though, most of the state records for cold are not at risk of falling except perhaps in the southern Plains following the big weekend snowstorm.
Read More Download Full PDF

Kansas City, December 23 (World Weather Inc.) – A late week and weekend storm system advertised in the U.S. Plains promises to draw much atmospheric energy into the middle of North America. Warm moist air streaming into the Plains from the Gulf of Mexico and cool dry air pushing south from Canada will help to take an innocent looking low pressure center moving from the southwestern U.S. desert region to the western Great Lakes region and blow it up into a major winter storm. If all of this occurs as advertised there may be some significant weather issues this weekend from the central Plains to the Great Lakes region stressing livestock, causing travel delays and lifting soil moisture in a part of the dry west-central and Plains. The storm system has many days to change its orientation and there is potential for change in the event that will be worth watching while most folks are on holiday. World Weather, Inc. does not believe the storm will be as intense as advertised by some model runs.
Read More Download Full PDF 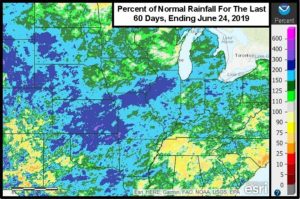 Rounds of impressive and significant rainfall have greatly impacted the central United States since late April. The significant rain has put many agricultural areas under water, prevented or seriously delayed the planting of many grain and oilseed crops and caused plenty of river flooding. Rainfall has been well above average and record breaking. Here in Kansas City, it has been the wettest year on record through June 23 and it is beating the previous record by close to 2.00 inches. Some of the most significant rain anomalies have been near Wichita, Kansas, however.
Read More Download Full PDF

SE U.S. May Have A Drier, Warmer-Biased Summer

Brad Luchen, one of World Weather, Inc.'s meteorologists, recently completed a statistical weather study based on the ten wettest 12-month periods ending in March in the southeastern United States. The results of his study suggested the following May through August period tended to be warmer and drier biased. His findings fit well with other World Weather, Inc. studies correlating a drier than usual bias in the southeastern states during the May through July period following record cold Novembers in the heart of the Midwest, record cold Februarys in the northern Plains and solar minimum years.
Read More Download Full PDF 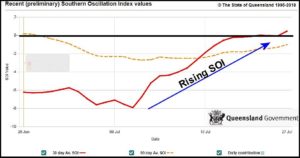 East Australia Rainfall May Improve, According To SOI Data

Kansas City, July 27 (World Weather Inc.) – East-central Australia is still suffering from chronic dryness. Unirrigated areas of Queensland and northern New South Wales have been critically dry for an extended period of time and with El Nino possibly evolving later this year or in early 2019 there is concern that drought conditions will become much worse before they get better. The Southern Oscillation Index (SOI) is possibly offering a little short term hope for the region after being consistently negative earlier this month. A notable rise in the SOI since July 10 has left some potential that August rainfall will be more normal than that of recent months.
Read More Download Full PDF 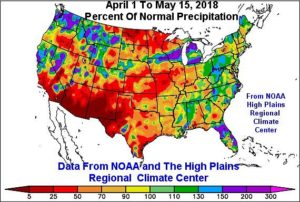 Kansas City, May 16 (World Weather Inc.) – It seems logical at mid-May while at the threshold of summer to take a minute and assess the weather’s role in field progress and crop development thus far in the North American growing season and then revisit the trends that should guide us into the future of summer weather. This article is designed to lay out the facts that have gotten us in the current state of soil moisture and anomalous weather and reassess the outlook for the next few months. There are some very interesting trends that need to be noted which will make this a long read, but the conclusion at the end should give us a better target of expectations for the summer growing season that lies ahead.
Read More Download Full PDF

Temperatures To Trend Above Avg. In Many U.S. Crop Areas

The arctic air mass that caused bitterly cold temperatures across much of the United States earlier this week will be gradually fading over the next couple of days and will be replaced with a warmer air mass. Many crop areas, including the Midwest, Hard Red Winter Wheat Region, and Northern Plains will receive above average temperatures Friday through Sunday. These warmer temperatures will be aided by a trough of low pressure that will move into the western United States later this week. This will promote a southerly wind in much of the Midwest, Delta, and southern Hard Red Winter Wheat Region which will help pull in more warm, moist air from the Gulf of Mexico area.
Read More Download Full PDF

By Brad Luchen and Drew Lerner Temperatures across much of the Northern Plains and Hard Red Winter Wheat Region will be above average into the middle of next week. A large cause of this will be related to a flow of air that will often be from the northwest to southeast. This air will warm
Read More Download Full PDF

We’d love to hear from you. You can reach us via phone or email below.